Unlike Windows, Mac OS does not have an “Uninstall or Remove Applications” like program. Apple’s recently announced Mac App Store certainly makes installing Mac Apps extremely easy, but uninstalling them is not so direct.

It is a good idea to remove Apps that you don’t use and make your Mac free of bloat ware. Simply use any of the two methods mentioned below, and you’ll get to know how to remove applications installed on your Mac.

END_OF_DOCUMENT_TOKEN_TO_BE_REPLACED 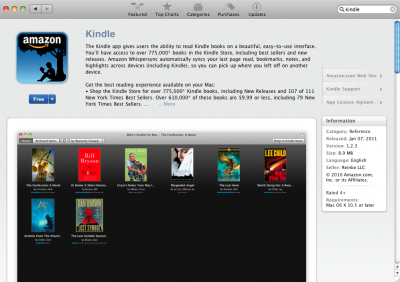 Amazon’s Kindle App for the Mac is now available for download via the Mac App Store for free. The application allows Kindle users to access their library from their Mac and even sync bookmarks, highlights, and notes using Kindle’s WhisperSync technology.

END_OF_DOCUMENT_TOKEN_TO_BE_REPLACED

The Mac App Store is now live and features over 100,000 Apps. Apple learnt from the success of its iOS App business and applied the same theory to the Mac. The store is simple, features amazing Apps, makes updating Apps extremely easy, and is a curated place for Apps of all kinds for the Mac.

END_OF_DOCUMENT_TOKEN_TO_BE_REPLACED

Apple has announced that over 1 million Apps have been downloaded from the Mac App Store in the first day. The store has received a tremendous response and we believe that the platform is extraordinary and will also help increase Mac sales.

The Mac App Store will be opening tomorrow and Mac OS X 10.6.6 would be required to run the application. The store would feature thousands of applications, all curated in one place allowing users to instantly download Apps for Mac.